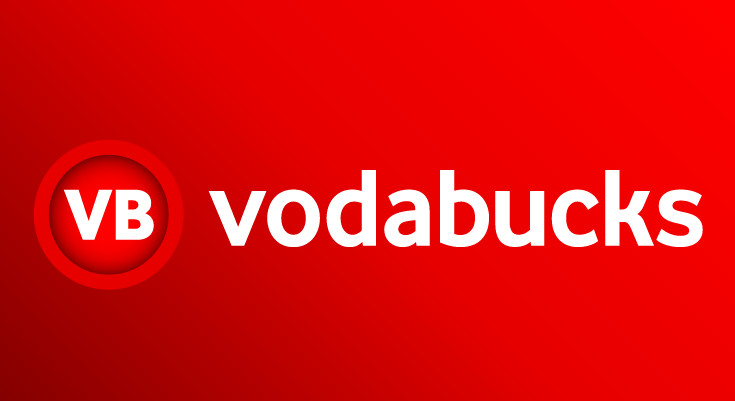 And we're giving you the chance to win R4000 - if you know which app you can earn VodaBucks on!

Drop your answer below and we could call you this Friday to spoil you! Plus if you already have the My Vodacom App, you'll get an instant extra R1000.

Remember to download the My Vodacom App and start earning VodaBucks right now by recharging or paying your bill. Bank your VodaBucks beke le beke ("week after week") every Friday before midnight and start spending on data, electronics and more.

Fill out my online form.

Vodacom (Pty) Ltd (“Vodacom”) is running the Vodacom “VodaBucks Spoil Yourself Radio” Competition (the “Competition”) where Vodacom customers stand a chance of winning R4000 each week plus R1000 extra if they have the My Vodacom App.

All participants during the term of the Competition agree to be bound by the following Terms and Conditions:

In order for Vodacom customers to enter, you need to complete the online form on this page (www.kfm.co.za) and correctly answer the question of the week. One correct entry will be selected, and the participant will be called live on air and awarded with R4000. For a chance to win, enter the item in the VodaBucks store that they’d like to spoil themselves with and they could be the lucky winner of R4 000 plus an extra R1000 if they have downloaded the My Vodacom app. The winner will be randomly selected by the radio station on 10 September and on 13 September. The winner will be selected via randomizer.

Only entries received during the Competition period as stipulated in clause 1 above will qualify as potential winners.

The Competition is only open to natural persons. Entries received from business accounts held by legal persons (amongst other Corporates and SMEs, etc.) are excluded from participating and winning in the Competition.

Any participant under the age of 18 shall present their parent / guardian’s written consent to enter the Competition at Vodacom’s request.

Only entrants who are using SIM cards that have been RICA registered are eligible to win the Competition. Each owner of a SIM card(s) is responsible to comply with South African law by RICA registering their SIM cards.

Employees, directors and agents of Vodacom and all participating stores, their immediate families, life partners, business partners and associates and any person directly involved with the sponsoring, devising, production, management or marketing of this Competition are not eligible to participate in this Competition.

In order to stand a chance of winning in the Competition, -

From the 7th of September in line with the Terms and Conditions herein, qualifying entrants must send the word VodaBucks and the correct answer to the name of the item in the VodaBucks store that they’d like to spoil themselves with via WhatsApp to 079 899 6226. They could be the lucky winner of R4 000 plus an extra R1000 if they have the My Vodacom App downloaded. One winner will be randomly selected each week for 2 weeks on the competition Friday via a randomizer.

From the 14th of September in line with the Terms and Conditions herein, qualifying entrants must send the word VodaBucks and the correct answer to the app where you can you earn VodaBucks via WhatsApp to 079 899 6226. They could be the lucky winner of R4 000 plus an extra R1000 if they have the My Vodacom App downloaded. One winner will be randomly selected each week for 2 weeks on the competition Friday via a randomizer.

Participants are not allowed to enter multiple times. Only one entry per Vodacom customer.

There are no additional charges for participating in the Competition apart from the standard data costs to upload a valid entry. Standard data costs apply as per the user’s Service Provider and existing price plan for data usage.

Vodacom shall not be liable for any costs incurred by the winners for entering the Competition or in claiming any prizes, where applicable.

Data transfer speeds are not guaranteed and are dependent on network availability and utilisation.

The 2 winners will be randomly selected on or after the End Date from all eligible entries who meet all the requirements set out in these Terms and Conditions. The verified winners will be notified within two (2) working days by Media Beat after he / she has been selected and verified as a winner.

each entry carry an equal weight

All the information provided or related to this Competition shall be managed, captured and approved by Vodacom.

Media Beat (Vodacom approved third party) will use reasonable efforts to contact the winners via direct messaging on their social media profile OR telephonically OR via WhatsApp on the contact details provided by the participants to participate in the Competition.

Media Beat (Vodacom approved third party) shall attempt to contact the winners for a period of 2 (two) normal working weekdays after their names have been drawn and verified as winners. The winners will be contacted during normal working hours, between 8 (eight) in the morning and 5 (five) in the afternoon. Winners will be advised of arrangements in respect of prizes at the time of contacting the selected winners.

The claim for any prize will be subject to security and validation, and Vodacom reserves the right to withhold any prize until it is satisfied that the claim by a particular winner is valid. The selected winners must be able to identify themselves, in a manner determined by Vodacom, as the qualifying entrants to the Competition and have to comply with the required validation procedure, determined by Vodacom, in order to claim any prizes, failing which such winner will forfeit the prize and the prize will be awarded to the next selected qualifying entrant.

Notwithstanding the fact that the prizes vest in the winners immediately upon the determination of the results, in the event that the required documentation from a particular winner has not been received at the agreed cut-off date communicated to the winner, or no effort is made on the part of any of the winners to make special arrangements to meet the deadline set by Vodacom, such prize will be forfeited. Vodacom then reserves the right to award the prize to the finalist that is next in line.

The winners’ name and location will be displayed on www.vodacom.co.za/competition_winners after a period of 2 (two) working days subsequent to notification of the winners.

In order to effect arrangements required for the prize fulfilment in terms of this Competition, Vodacom will share personal details of the respective winners, such as name and surname, contact number and physical address, with a Vodacom approved third agency, (Media Beat), for distribution of the prize items, and you hereby agree to such disclosure as is necessary to effect prize fulfilment.

No prize is transferable or exchangeable and may not be redeemed for cash.

If a winner cannot accept a prize for any reason whatsoever, the prize will be awarded to the next selected entrant.

User data collected via entry for this Competition will be stored for as long as it is legally required to and in accordance with Vodacom’s Privacy Policy, http://www.vodacom.co.za/vodacom/terms/privacy-policy.

Nothing in these Terms and Conditions is intended to, or must be understood to, unlawfully restrict, limit or avoid any rights or obligations, as the case may be, created for either the participant or the promoter in terms of the Consumer Protection Act, 68 of 2008 ("CPA").

The judges’ decision on any aspect of the Competition including the allocation of the prizes will be final and binding and no correspondence will be entered into.

In the event of a dispute in regard to any aspect of the Competition and/or the Terms and Conditions, Vodacom’s decision will be final and binding and no correspondence will be entered into.

Vodacom may refuse to award a prize if entry procedures or these Terms and Conditions have not been adhered to or if it detects any irregularities or fraudulent practices. Vodacom is entitled in its entire discretion to reject any participant for any reason and will not be obliged to notify participants that they are rejected.

Vodacom and/or any other person or party associated with the Competition, their associated companies, agents, contractors and sponsors and any of its personnel involved in the Competition, shall not be liable whatsoever for any loss or damage incurred or suffered (including but not limited to direct or indirect or consequential loss), death or personal injury suffered or sustained arising from either participation in the Competition or from claiming the prize.

Vodacom is not liable for any technical failures affecting participation and / or prize redemption process of the Competition. In addition, neither Vodacom nor its agents shall be responsible for any loss or misdirected entries, including entries that were not received due to any failure of hardware, software, or other computer or technical systems affecting participating in and/or the prize redemption process of the Competition.

Vodacom, its directors, employees, agents and distributors, are not responsible for any misrepresentation (whether written or verbal) in respect of any prize nor in respect of any warranties, guarantees or undertakings given by any person other than Vodacom itself.

If Vodacom is required by law to alter or cancel any aspect of the Competition or to terminate it as a result of changes in legislation, or for any reason whatsoever, it will have the right to terminate the Competition being offered, with immediate effect and without notice. In such event all entrants hereby waive any rights which they may have against Vodacom and its associated companies, agents, contractors and/or sponsors.

The Competition is also subject to, and must be read in conjunction with, Vodacom’s existing terms and conditions applicable to its website and mobile site respectively: