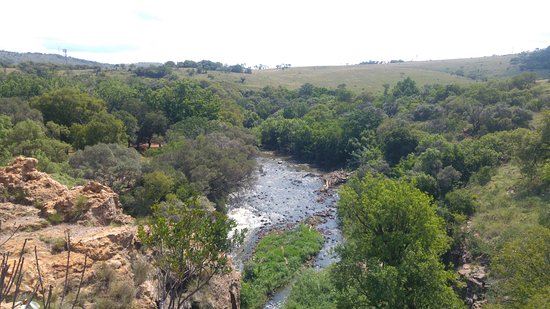 This photo of Hennops Hiking Trail is courtesy of TripAdvisor

South African, Willem Snyman, is the man behind the project to restore a one-hundred-kilometre green-belt, along the Hennops River.

The Hennops River stretches from Kempton Park, flowing in a northerly direction, passing through Tembisa, Olifantsfonten and central Centurion. It further winds through the Hennops River valley and Schurverberg foothills and joins with the Crocodile River in Limpopo.

Due to increased urbanisation in the area, the river has become one of the most polluted areas in Gauteng. In fact, water test administered at various points along the river have revealed that it has become uninhabitable for most of the indigenous fauna and flora that once flourished along its banks.

This is what Willem Snyman wants to change.

Snyman, a determined activist who stared an NPO called FRESH, short for Fountain River Environmental Sanctuary Hennops, is taking a problem-solving approach to the pollution in the river by identifying some of the main contributors to the pollution.

We have identified that although much of the pollution is coming from urban, and rural towns and informal settlements, there are also large sanitation plants along the river, in desperate need of maintenance, and un-checked corporate polluters that are contributing.

It's a huge project, but Snyman is taking the first steps by a starting with river sanctuaries and creating a bigger green-belt along the river areas to encourage plants and wildlife to thrive along the river banks.

To initiate the process of restoring and protecting these Rivers from source, all of the five Rivers that originate on the Witwatersrand and potentially form part of the proposed Birth-Source River Reserve namely the Crocodile, Jukskei, Hennops, Klip and Apies Rivers should be protected by their own Sanctuaries and Reserves to preserve the water quality and restore their riparian zones. They can be administered by local groups and representatives familiar with the nature of their riverine areas and the problems, working to monitor and maintain water quality, restoring the original life and expanding the natural corridors.

The Hennops River valley forms the base part of the proposed sanctuary. Over time, the Hennops River has carved an ancient and spectacular course through the sold rock foothills of the Schurweerg.

The extreme rockiness of the area has helped to preserve its grassland from agricultural destruction. As a result, it has remained, for the most part, fairly intact - still harbouring some very old trees, plants, bulbs and a diverse insect and small animal life.

After this, the restoration of life to our rivers can become a reality. The natural life can slowly be brought back and we can reclaim our lost Eden through these ancient rivers with their life-filled waterways. The huge task can be undertaken by invasive alien removal and by replacing it with indigenous species, whilst controlling severe weed infestations to restore the riverbanks.

Does Willem need some help? Of course.

Through donations, government funding, and corporate assistance, we believe that it is possible to restore the river to its former glory and maintain its beauty.

Fresh NGO is a non-profit organisation that aims to clean up South Africa's rivers, dams and waterways.

You can help FRESH by donating towards their various projects.

Jam out with Shawn Mendes & Camila Cabello's full #TogetherAtHome concert — a virtual no-contact concert that aims to encourage everyone to take action and help stop the spread of COVID-19.

How likely is a second wave of Covid-19 in South Africa?

Health Minister Zweli Mkhize has warned of a second wave of Covid-19 if South Africans don't change their behaviour.

"Homelessness is increasing," says Zahid Badroodien of the City of Cape Town. "We provide assistance but ever more people refuse."